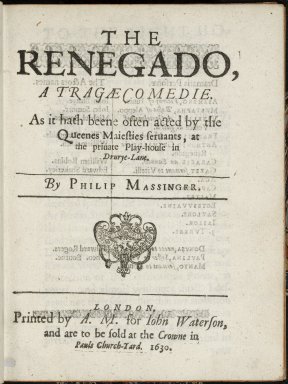 Title page imaged from Folger call number: STC 17641 copy 1. Image is not from the transcribed copy.

Set in Tunis, a major city in North Africa, Philip Massinger's play The Renegado centers around the Venetian gentleman Vitelli and his attempts to rescue his sister, the virtuous Paulina.

Before the beginning of the play, Paulina has been captured by the pirate Antonio Grimaldi, the titular “renegado,” a convert from Christianity to Islam. Grimaldi sold Paulina into the harem of Tunis’s Viceroy, Asambeg. Paulina is protected from Asambeg’s advances throughout the play by a magic amulet. Unable to rape her, Asambeg treats her with respect and attempts to win her love. Paralleling Paulina’s predicament, but rather more successful in bed, Vitelli meets, falls in love, and sleeps with Donusa, a Turkish princess. When the couple is discovered, both Vitelli and Donusa are imprisoned. Donusa is convinced to attempt to convert Vitelli to Islam to redeem her lost honor; during her attempt, he converts her to Christianity instead. There is a humorous subplot involving castration.

Grimaldi falls from Asambeg’s favor. Newly remorseful of his past actions, he helps Vitelli, Donusa, and Paulina escape to Italy.

Playbooks at the Folger

The Folger has three copies of the first edition of The Renegado, which was printed in 1630 by Augustine Matthews for John Waterson. Complete image sets for two of these copies are freely available to access, download, and use, providing you follow the Folger’s image permissions policy.

No two early modern playbooks are exactly alike. If you compare the printed copies at the Folger, you will see errors in type-setting that were corrected in-press, illegible or missing words, or marginal annotation. Since our documentary editions are representations of a single copy of a single edition, to create an authoritative edited text you will need to consult other copies and even other editions to help you choose which readings to prioritize. Before collating the text, you would need to locate surviving copies. The English Short-Title Catalogue (ESTC) lists known locations (though possibly not all of them): you can find a link to the play’s entry in the ESTC on each EMED play entry in the Bibliography section.

In act 3, scene 3, Mustapha tells Asambeg that the Turkish princess Donusa, who has rejected them both, has asked him to help her win the Christian Vitelli. Take a look at this scene in the two copies of the playbook imaged by the Folger. In copy 1, you'll find marginal annotations that amend the printed text. If you were to make an edition, would you choose the manuscript or print variants? Why? How would you go about assessing the status of these changes?

At least one scholar, W. W. Greg, believed these particular marginal notes to be authorial, in the hand of Philip Massinger himself. He makes his argument in More Massinger Corrections: Notes on Old Books (London: OUP, 1924).

Folger STC 17641 copy 3 sig. [E3r] (signed D3). This version of leaf E3 shows several errors, including the spelling of 'noon' in the first line and the signature, which reads 'D3' instead of 'E3'. It is not unusual for copies to show a mix of corrected and uncorrected pages.

You can find other types of marginal annotation in other playbooks in the Folger’s collection. They may be marked up for performance, contain marks of ownership or of censorship, and even sketches of characters. Look at the extensive editorial emendations made to The Royal King and the Loyal Subject (RKLS) (1637, STC 13364 copy 2), Images. What do you notice has been done to the spelling? Compare these marks to the two displays available via the original and regularized spelling toggle on EMED’s edition of The Renegado. What choices does an editor need to make regarding orthography and modernization?

When making an edition of a play based on the EMED documentary edition, you will want to pay particular attention to stage directions and speech prefixes, that is, the often abbreviated name of the character printed at the beginning of most speeches. Since the EMED edition is a faithful transcription of a copy of the earliest printed edition of the play, our texts may sometimes have ambiguous or even incorrect speech prefixes. Stage directions can be misplaced (for example, an exit instruction for a character who has a subsequent speech). Sometimes, there is little in the way of stage direction. Think about your target audience for an edition: would you want to change or add in any extra stage directions? How would you indicate that you have intervened in the text?

See also the EMED Editing page for a full exploration of EMED editorial practices, as well as additional readings, and our Teaching page for more pedagogical materials.