We’re eager to share Early Modern English Drama (EMED) with your students, including in college and graduate school. EMED is both a source of play texts to read and compare to others, and a new resource for digital humanities research. Below you’ll find the beginnings of a collection of pedagogical resources devoted to early modern English plays and playwrights beyond Shakespeare and intriguing new ways to explore them through digital humanities (DH) approaches. This page is envisioned as a collaborative space to which you too can contribute approaches and lesson plans. We can’t wait to hear from you! 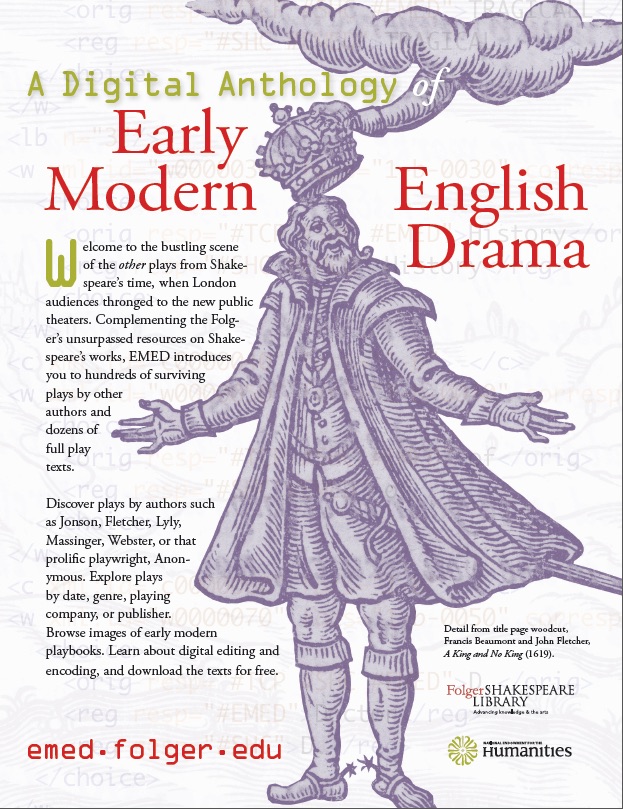 Each Early Modern English Drama documentary edition represents a single material playbook (one witness). These early printed witnesses offer many exciting pedagogical opportunities: they can be used to introduce issues of textual editing, unsettle students’ expectations of early modern drama, serve as a starting point for exploring early modern print practice, and much more. Try comparing these texts to a modern edition to challenge the idea of a “finished” version of the play, or give students a scene to perform or edit.

Documentary editions, with all their problematic spelling, layout, punctuation, and apparatus (or lack thereof) give agency to the modern reader. We hope these editions can empower students to take ownership of the texts. The translation from dramatic performance to printing house always complicates the text, and the resulting messiness offers undergraduates paths into conversations about textual transmission and print house practice. Unlike their Norton or Arden editions, these documentary editions rarely have cast lists, reliable act and scene divisions, or entrances and exits for all characters. Lines may be misattributed; set as prose when they’re verse or verse when they’re prose; or may not line up with the given stage directions. We invite students to create editions of a scene or whole play, to discover new plays to read or perform, or to plot connections among the printers and publishers of early modern London.

Complicating Prose and Verse
Lesson plan for the undergraduate classroom: explore verse and prose in Shakespeare’s As You Like It, Marlowe’s Massacre at Paris, and Middleton’s The puritan; or, the widow of Watling-Street (also available as a PDF)

Student-Created Network-Driven Editions (PDF)
Lesson plan for the undergraduate classroom, focusing on using metadata to reconstruct networks between the producers and performers of plays in the early modern period.

Exercises and modeling use of EMED

Editing Massinger’s The Renegado
EMED documentary editions offer many opportunities for engagement with editorial practice and theory. This case study allows users of the EMED site to try out editorial decision-making by modeling manuscript and print differences across different copies of the same text.

Performance and Publication in 1594
This bibliography pulls together online and print resources relating to theatrical production on stage and page in 1594. 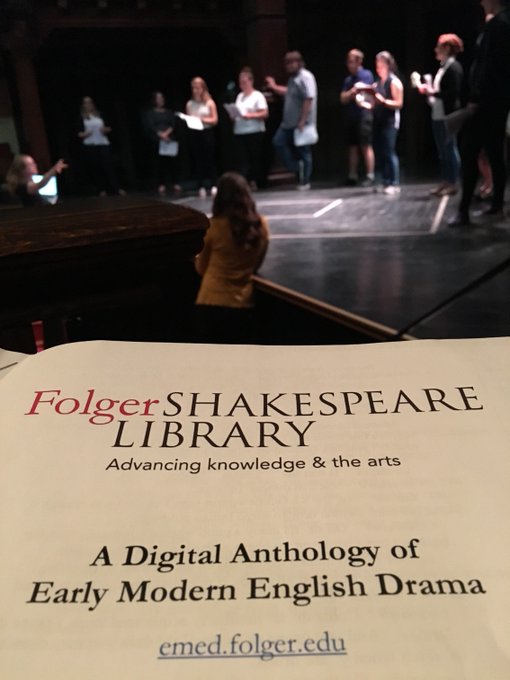 In June 2017, twelve undergraduate students participated in a workshop devoted to exploring EMED play texts from a variety of angles, including performance, book history, corpus analysis, linguistics, and editing. Drawing on one or more of these approaches, participants crafted their own projects in small teams under the guidance and mentorship of visiting faculty. Morning sessions focused on subjects such as linguistics and philology, bibliography, and XML, with afternoons dedicated to group project time.

We offer material from this workshop for you to use and adapt in your own classroom, to both model and inspire new approaches to digital playtexts. With thanks to the workshop instructors and participants.

How to plan a project

This presentation and checklist help students understand all of the steps that are necessary in thoughtfully planning out a project. The handout is designed to be a checklist that they could—and would—actually use during the workshop; you are free to reuse this in your own projects and classrooms. The presentation is seeded with examples to demonstrate that this kind of planning and scoping is useful for projects of any size. During the session the group generated additional examples from their preliminary discussions (the slides shown here include these ‘crowdsourced’ examples).

Sarah Connell on the importance of project planning: ‘In my time coordinating projects and working with graduate and undergraduate students on digital research, I've seen how important it is to start with a clearly-stated research question, so I made sure that was the first item on the list. To come up with the rest of the items, I thought about all of the things I do when I'm starting on a new project—and I was surprised at how many of these steps I'd been consistently taking without ever articulating them to myself! In addition to stating research questions and identifying project goals and audiences, I also talked about how important it is to think through your methodologies and the research objects you can use; I encouraged the students to set aside time for scoping their projects and creating a work plan; and I also stressed the need for file management and organization. I closed by talking (at some length!) about how crucial documentation is—and I was very glad that all of the instructors in the room spoke up in support of this point.’

Project Group Members: Shaun Nowicki (SUNY at Buffalo), Linda Braus (Carroll University), Emily Johnson (University of Maryland)
Text(s): The Shoemaker's Holiday by Thomas Dekker (1600)
Project Summary: Our editorial project was born out of the vision of an edition of the play that would be useful for fellow undergraduates and readers at-large that are interested in enjoying and better understanding the text, as well as potentially performing it. We believe that the subtleties of The Shoemaker's Holiday reveal themselves through the play's careful language: including lexical definitions that may now be obsolete and obscure puns.

Our project sought to highlight these subtleties, which contribute to the play's nuanced and overarching commentary on class difference in Early Modern English society. In order to do so, we worked with a particularly rich scene (Act II, Scene V in some editions of the play — but it varies). We read the Folger EMED scene thoroughly with the historical context of early modern England, the performative expertise of director Michael Tolaydo, multiple critical editions of the play, the online version of Oxford English Dictionary, and the online tool CQPweb — all to realize and understand the implications of specific words choices in the scene — and created notes for the readers we had in mind. We then added these notes to the Folger EMED version of the file via XML encoding through Oxygen.

With the open access nature of the project, we also envisioned that future scholars would not only be able to use our notes but to add to them, as they explore their own rich thoughts and ideas and further useful digital humanities tools are developed.

Project Group Members: Sarah McKeevers (East Carolina College), Phuong-Nghi Pham (Amherst College), Promise Li (Occidental College)
Text(s): Holland’s Leaguer by Shackerley Marmion (1632)
Project Summary: As part of the ‘Opening the Digital Anthology’ workshop at the Folger Shakespeare Library in June 2017, we have begun providing critical annotations for Holland’s Leaguer, a city comedy by Caroline playwright Shackerley Marmion. The play has only been critically edited once in 1875, leading to its obscurity in popular and even scholarly circles. Our research aims to inspire future readers and scholars to continue to make the text accessible to students and to the public. Our budding editorial work on the Prologue and Act 1, Scene 1 includes annotations revolving around three lenses: 1) allusions, 2) linguistic constructions, and 3) textual variants. The first group of annotations focuses on unpacking the high concentration of classical allusions. The second group explains the linguistic context of difficult words and phrases. And finally, the third group analyzes the peculiarities in the physical manuscript itself and those that arise in the transcription process, and how it may affect the reading of the play.

For textual decisions, we subscribe to the principles of the EMED project at the Folger Shakespeare Library. Letters s, u/v, i/j are regularized for ease of reading. For more details, please see EMED’s Editing page.